October 04, 2010
Wow, what an incredible journey Mike Younghusband began on October 1st. He is walking with a burro and two dogs from the border town of Tecate to Cabo San Lucas in, hopefully, six months.

You can read the story below from the San DiegoUnion Tribune newspaper and we'll hopefully have updates throughout his travel. You'll see he began the journey and purchased his donkey at one of my favorite Tecate ranches; Rancho Ojai. 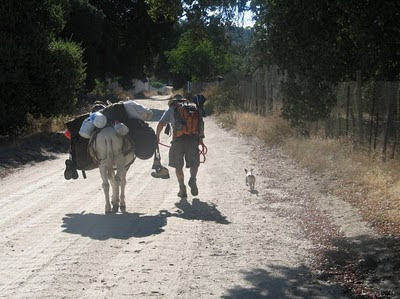 Baja adventure begins for man, his burro and two dogs

El Cajon's Mike Younghusband begins his trek of the length of Baja with his burro, Don-Kay, and two dogs, Rusty and Max.

TECATE — Mike Younghusband began his Baja adventure today with a loaded burro, his two pet dogs and a heart filled with wanderlust that he hopes will power him on his six-month, 1,500-mile trek of Mexico’s incredible peninsula.

“Viva Mexico. God Bless America,” Younghusband yelled as a Tecate TV station filmed him loading his burro and heading out on his incredible journey that will take him mostly along the Baja coast to his final destination, Cabo San Lucas.

“He’s driven, motivated, but the thing I worry most about is him getting lonely,” said his daughter, Tammy Mettler, who was part of the send-off contingent that joined Younghusband at Hernan Ibanez Bracamontes’ Rancho Ojai in east Tecate.

It took Younghusband 45 minutes to get his trusty burro, the stubborn, 4-year-old Don-Kay, loaded to go. As he packed, thunder roared in the Tecate valley. If that wasn’t ominous enough, Younghusband drove through a large section of east Tecate that had burned in a roaring wildfire that, at one point, threatened this oasis in the desert last weekend.

It didn’t take long for Younghusband to pit-out his Baja Nomad T-shirt, named for the Web site he frequents. Younghusband, 61 and a former El Cajon cop, wasn’t deterred by any of that.

“He made up his mind exactly a year ago to do this,” his daughter, Tammy, said. “It was Oct. 1 last year when he told us he was going to do this. I’ve hit him with every question I could since then, but he always has an answer. He’s set to do this, and he will.”

Spence, his neighbor in El Cajon, said she knows exactly why Younghusband is attempting this rigorous trek that is expected to take approximately six months. He plans to have a layover in Loreto, where he owns a home. Spence believes it’s as much about soul-searching as it is about wanderlust and adventure-seeking.

“I think he is looking for a purpose to his life,” Spence said. “He told me he just got tired of getting up every day, going to work, coming home and turning on the TV and then going to bed. Same thing every day, he said, and he got tired of it. He said there has to be more to life than that, and he’s going to go look for it.”

Younghusband told a Tecate TV station today that his trip also is about showing Americans that it’s safe to travel in Baja.

“I want all Americans to see that you can come to Baja, be a tourist and be safe,” Younghusband said.

Younghusband’s family had a going away party for him last Sunday during the Chargers-Seahwaks football game. They made a giant banner that said, “Buena Suerte on Your Adventure Down Baja!” and took a picture of family and friends behind it. They put the picture in a card and all signed it. And Tammy wrote a letter to her father that he’ll open on the trip.

Younghusband said his gear on Don-Kay weighs approximately 200 pounds, about 100 pounds on each side of the sturdy Don-Kay. He’s also carrying 50 pounds of gear in his own backpack.

When told it looked like he had the kitchen sink in his pack, Younghusband said, “If it’s too much, I’ll give some stuff away to a Mexican family along the way. Don-Kay will let me know if it’s too much.”

In addition to worrying about her father getting lonely, Tammy Mettler is concerned that Max, an 8-year-old chihuahua-dachshund mix , will have trouble keeping up.

“The veterinarian said he’s right on the edge of being too old for a trip like this, but my father really wants to take him,” Tammy said. “I guess if he has trouble, someone can go down and get him.”

Younghusband won’t have to worry about Rusty, his 2-year-old Jack Russell terrier who bounded off on the trail after Don-Kay had to be coaxed out of the Rancho Ojai gate.

“It was a female, and it was pregnant,” Younghusband said. They made another deal, and Younghusband managed to get Don-Kay, who was Bracamontes’ prize burro.

Younghusband spent a year planning, and his daughter said he has left no detail unchecked. He made several trips to Baja to bury caches of food and supplies, even whiskey for “drinking and trading,” he said.

As he left the gate, he already had worked up a sweat as dark clouds gathered to the east.