May 12, 2010
I thought I'd put down my thoughts on my first flight on up and coming Volaris Airlines. Even though I was flying to Acapulco for April's Tianguis Turistico travel show, I was flying out of Tijuana. I was also taking their U.S. shuttle from San Diego to the Tijuana airport.

I decided to take the red-eye on a Saturday night leaving Tijuana at 12:55am and arriving in Acapulco at 6:25am. Two factors brought me to this decision; price and a direct flight. The price was incredible ($230 USD roundtrip) and I also could pay $2 USD to select my seat which was the emergency aisle. After so many years of visiting Acapulco for the show and having to connect to a different flight in Mexico City - sometimes waiting for 3 hours - a direct flight sounded great.

After making reservations online, I also reserved the round trip cross-border shuttle from the San Diego Greyhound station, which is downtown, to the TJ airport. Cost was $15 USD. You do have to be at the bus station about 3.5 hours before your flight, but the hassle of driving to the border or having someone drive you over the border was worth it.

The bus was nice and already had passengers on it, probably from Los Angeles. We did have to make a number of stops before arriving at the airport. First as in San Ysidro, CA to pick up any passengers (none on this trip). Then we got in line to cross the border and were boarded by U.S. Customs Agents who asked questions and searched some passengers. Next were the Mexican Customs Agents just across the border (The U.S. Agents took longer - about 10 minutes total). Next we got off the bus, pushed the Pase or No Pase button, and then boarded another bus with my luggage. This part was a little confusing, but once it was done we were at the airport in about 15 minutes.

Once at the airport, I sk 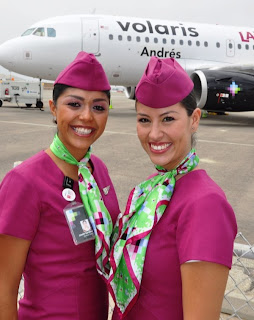 ipped check-in as I had printed out my boarding pass online (another benefit). Purchased my FMT (tourist card) for $22 USD and headed for the boarding gate. I had a hour & 1/2 wait, but the waiting area was nice.

Once on the flight, I was ecstatic to have the emergency aisle seat reserved as it had so much room I could completely stretch out my legs. I have never been on an airline with that much room. The flight took off on time and we actually got to Acapulco 20 minutes early. Normally a benefit, but not at 6am!

Lastly, the flight home was just as good, but I did have to wait for the shuttle for 35 minutes which was not so good as I was tired from the flight. Small potatoes though and overall Volaris was great. I would fly them again and they now fly from different cities in California too.
Acapulco airlines tijuana airport volaris volaris shuttle

Anonymous said…
So, Ted, you definitely were able to purchase the FMT directly AT the Tijuana airport since you were travelling beyond the border zone where tourist cards are not required? I'm planning to meet up with some friends in San Diego the first weekend in August and then fly Volaris from TIJ to Leon-BJX for a few days before coming home to Michigan. Just need to confirm that I can definitely get that tourist card at TIJ airport and don't have to necessarily purchase it right as I come across the border from San Ysidro. Thanks for confirming! Phil, Grand Rapids, MI
May 1, 2011 at 7:39 AM

Jorge Monasterio said…
Yes. You can get at TJ airport.

Anonymous said…
Yes, everyone needs the FMT (or tourist card) for travel in Mexico. It's really simple. Near the line to enter the airline counters you will see the immigration booth. Ask for it there and they will give you the form and tell you how to pay.
July 23, 2012 at 1:50 PM

Baja Visitor said…
I believe the immigration booth at the Tijuana airport is only for those flying. You can simply get your 7 day or more tourist card at the border with Otay Mesa crossing the easiest and with the least traffic.
April 30, 2015 at 9:26 PM

Anonymous said…
Thank you for this post. I was nervous about flying from Tijuana even though I hear people do it all the time. This answered some of my questions. What about the new border crossing terminal that opened. Have you used it yet? And is Volaris still your choice?

It's funny after all these years (this trip was in 2010) I still receive questions and people still read the post, glad it's helping.

I have not used the new border crossing, but will soon and, of course, write about it. Sounds like a great option.

And, yes Volaris Airlines is one of Mexico's best. I always enjoy flying with them. By the way, they just celebrated their 10th anniversary.

Have no fear about crossing the border and using the Tijuana Airport. In fact, cherish the fact you can travel from Tijuana to the rest of Mexico. It's quite an experience.