Update on Mike Younghusband and his Baja trek

El Cajon's Mike Younghusband set out from Tecate, Mexico on Oct. 1 for a trek of the length of Baja with his two pet dogs and trusty burro, Don-Kay.

Today, more than a month later, Mike has one dog, a stray he named, “Solo,” and Don-Kay continues to carry his gear and be his trusted companion. Last week, the Baja adventurer sent home his two pet dogs, Max and Rust 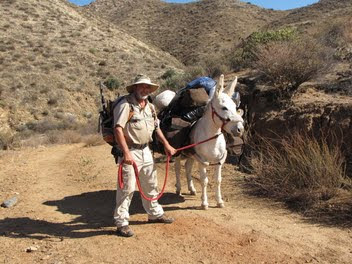 y, because he feared they might be struck by a vehicle as he walks along old roads or nears the highway on some of his hiking routes. It’s been estimated that Mike covered 219 miles in October for an average of 7.06 miles per day. He did 14 miles on his best day.

Mike told a poster on www.bajanomad.com, that Don-Kay is setting the pace. Because, as Mike told him, “when Don-Kay makes up his mind that he isn’t going any further, he isn’t kidding.” Baja residents, including members of bajanomad.com, have been treating him to an occasional warm meal and company along the way.

Graham Mackintosh, the renowned Baja writer and lecturer who was Mike’s mentor, visited his friend in late October and reports he’s doing great. Mackintosh spent two days and nights with Mike. Graham said the El Cajon native and former policeman has lost at least 15 pounds . He said Mike hated to send his dogs back, but he feared he might lose them. Mike loves his dogs and would be crushed to lose them that way.

Graham took Mike some cold pizza and beer, and the adventurer gobbled down the pizza and guzzled the cold beer. Graham also took Don-Kay some oats, carrots and apples, and the white burro inhaled the tasty treats. He said Mike will be in an area full of lobster shacks that local fishermen work out of along the coast. But once he reaches El Rosario, his trip truly will begin. He'll go long stretches without water sources.

"He's in such great shape and looks so different I didn't recognize him when I saw him," Graham said. "He really looks the part now. He was a bit overweight when he started. But he's really fit now after just one month."

Graham said Mike’s new dog, Solo, a bitch who looks to be a wolf-eyed Australian shepherd mix, has been a great addition. And in photos posted on www.bajanomad.com, Mike is pictured with another dog that looks to be a yellow Labrador. The new lineup, if you’re keeping score at home, shows Mike, Don-Kay, Solo and an unnamed, yellow Lab, who is trying to join the starting crew.

Mike now is making his way down the Pacific side of the Baja Peninsula. He passed San Quintin and the famous Old Mill and is south of there. He will remain on the coast and hopes to try out his telescopic fishing pole, according to Graham. He successfully found his buried stash at Punta Colonet. That gave him fresh water and a half-gallon of whiskey that he uses to refresh and for barter purposes.

"He said he isn't drinking as much or hardly any whiskey at all," Graham said. "He just doesn't have the desire for it. Plus he said he wants to keep his head clear to make decisions for him and his animals. He'll likely be giving that away."

Graham said Mike called him after the visit and said he already missed his two pet dogs, Rusty and Max.

“Mike sure misses his two dogs,” Graham wrote in an email. “He can’t help thinking of them back in San Diego missing him and missing out on what they’ve trained for a whole year . . . They’d gone through rattlesnake avoidance courses, he’d bought little boots for their paws, and doggy jackets . . . they’d gone everywhere with him, and lightened his journey for about 140 miles. But he’s so grateful for his newfound ‘guardian angel’ – Solo. She led him to the great campsite this evening (oasis with fresh water). It might be tough, but he knows he’s done the right thing for Max and Rusty.”

Also, for all those who have criticized Mike for loading Don-Kay with too much gear, he’s about to cut back on it and will be giving away some of it to Mexican families along the way. He has discovered that he does have too much and that will lighten the load for Don-Kay and perhaps motivate the burro to quicken his pace. But Mike knows his buddy’s make-up, and being in a hurry isn’t in his DNA, unless there’s food ahead, or in Don-Kay’s case, a jenny in heat.

Unknown said…
Mike,When your done writing your book and your visit to the Leno show,give me a call,I just got back from a solo trip to Patagonia,would love to talk to you ,and review your next trip.Love your quote"Fear is the destroyer of dreams" Chip 760-331-8484
April 23, 2011 at 10:07 AM