March 08, 2011
Mike Younghusband, his donkey appropriately named Don-Kay, and a stry dog named Solo are almost at the end of their 1,000+ mile hike from Tecate on the U.S. border to Cabo San Lucas. Below you can read a recent article on the trek and you can also follow the last six months of adventure on the BajaNomad forum. The photo is courtesy of Baja author and adventurer Graham Mackintosh.

Baja adventurer and burro near end of journey
By Ed Zieralski
Friday, March 4, 2011

El Cajon’s Mike Younghusband is nearing the end of his incredible walk of the Baja Peninsula with his burro named Don-Kay. 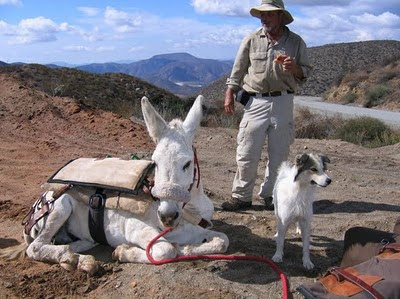 Younghusband, 61 and a former El Cajon police officer, has walked over 1,000 miles and has less than 50 miles remaining to reach Cabo San Lucas, his final destination. He left Hernan Ibanez Bracamontes’ Rancho Ojai in Tecate on Oct. 1 with Don-Kay, a 4-year-old burro he purchased from Bracamontes, and his two pet dogs, Rusty and Max. But the road proved to be too dangerous for his pets and he sent them home with legendary Baja traveler Graham Mackintosh.

“I can hardly believe I passed the 1,000-mile mark,” Younghusband said in a recent e-mail prior to reaching Todos Santos. “I’m still healthy and excited to get there.”

Part-way through his trip, Younghusband picked up a stray dog he called Solo, a female dog who has stayed with him and Don-Kay through some tough going.

“I have a lot of stories that will blow you away and can’t wait to share them,” he said. “They had a parade for me when I got to Lopez Mateos, talk about humbling.”

Mackintosh has stayed in touch with Younghusband throughout his journey. He has visited him on a couple of occasions when he was in Baja doing lectures or delivering books that chronicled his own adventures on the Peninsula and its islands. Mackintosh followed his progress from Younghusband’s daily reports via his SPOT device. Also, the members of BajaNomad.com have been instrumental in Younghusband’s safe journey to this point. At one stage members of the Website’s forum page helped rescue Younghusband, Don-Kay and Solo from death’s door when they ran out of water. At other times, BajaNomad members met up with Younghusband and shared food and drink with him.

Mackintosh isn’t surprised his friend stuck out his hike to the end.
“I was pretty convinced it was do or die for him,” Mackintosh said. “He spent a lot of time and money and made a big commitment to this. He met so many great people on Bajanomad.com., many wonderful people who helped him and continue to help him.”

Here's the direct link to the article: http://www.signonsandiego.com/news/2011/mar/04/baja-adventurer-and-burro-near-end-their-journey/