Over 200,000 acres of coastal land protected in San Ignacio Lagoon

August 30, 2012
According to The International Community Foundation, who do wonderful work helping the people ad environment of Baja and Mexico, land around San Ignacio Lagoon will now be protected. Please read below.

Mexico's Commission for Natural & Protected Areas (CONANP) has recently announced the designation of an environmentally-focused, non-extractive concession - otherwise known as an UMA "Units for the Conservation, Management and Utilization of Wildlife" (Unidades de Conservación, Manejo y Aprovechamiento de Vida Silvestre or UMAs) - to Ensenada-based Pronatura Noroeste, for the long-term protection and conservation of 184,000 acres of federally-owned coastal lands in Laguna San Ignacio, located in the El Vizcaino Biosphere Reserve in Baja California Sur. The announcement was made in a press conference in Mexico City on August 23rd, 2012. 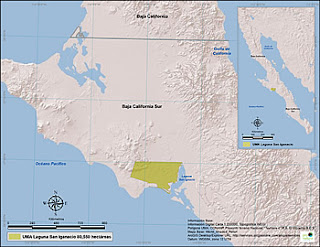 El Vizcaíno Biosphere Reserve is the largest protected area in Mexico and contains the most pristine whale birthing lagoon in the nation. The Whale Sanctuary of El Vizcaino, which includes the lagoons of San Ignacio and Ojo de Liebre, was established as a UNESCO world heritage site in 1993 and is on the Ramsar List of Wetlands of International Importance. The lagoon complex provides vital habitats for migratory birds, whales and local fisheries, and serves as a major economic source for the region's inhabitants (see attached map). The recently established UMA, which will now be managed through the stewardship of Prontaura, with funding support from the International Community Foundation, seeks to protect the unique biodiversity of these lands and adjoining coastal waters, while helping to promote limited eco-tourism.

The historic UMA agreement between CONANP and Pronatura Noroeste was made possible thanks to the steady support and commitment of the Laguna San Ignacio Conservation Alliance, of which the International Community Foundation is a founding member.

While the International Community Foundation has proven successful in securing close to $500,000 in funding to promote the stewardship of Laguna San Ignacio through the Baja Stewardship Fund, an additional $600,000 is needed to ensure that these lands are protected in perpetuity. The current stewardship costs for the UMA in Laguna San Ignacio are $48,000 annually. According to Richard Kiy, President & CEO of the International Community Foundation, "Pronatura's long-term concession in Laguna San Ignacio presents a unique opportunity for donors interested in leaving a lasting legacy to make an endowment gift to the Baja Stewardship Fund protecting the breeding grounds of the California Grey Whale."